SANTA IS JUST ONE OF THE FAMILY 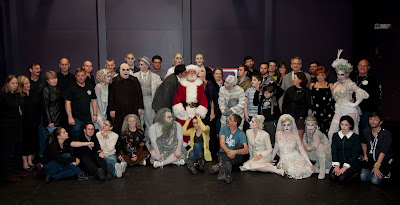 Posted by Segerstrom Center for the Arts at 10:39 AM No comments: 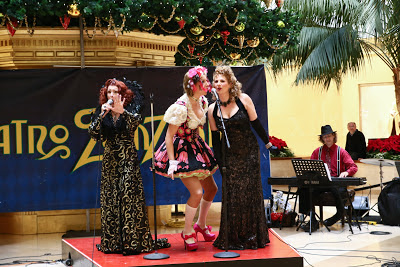 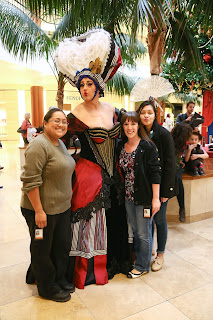 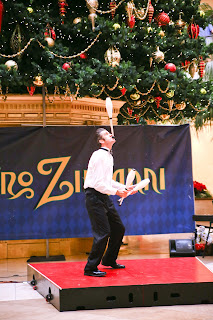 The date was 12:12:12 from 12:30 – 1 p.m. – the cast of Teatro ZinZanni swept into South Coast Plaza for an impromptu performance beneath the towering Christmas tree in Jewel Court. TZ stars juggled, sang, danced and vamped before a mesmerized crowd. The usual three-hour performance also includes an equally amazing five-course meal from Patina Catering. But this was just a snippet of what audiences can expect during the full length performance of Love, Chaos and Dinner being performed by Teatro ZinZanni at Segerstrom Center for the Arts through February 17.

Posted by Segerstrom Center for the Arts at 3:49 PM No comments:

Two performers from this year's Jazz Series have been nominated for Grammy® Awards in the Best Jazz Instrumental Album category. Pat Metheny, who received a nomination for Unity, performed in Segerstrom Hall on September 28. Ahmad Jamal, up for his Blue Moon album, performed in the Renée and Henry Segerstrom Concert Hall on November 24.

Other artists nominated this year who have also appeared in the Center's Jazz Series include Chick Corea, Brad Mehldau, Kurt Elling, Esperanza Spalding and Arturo Sandoval.

Posted by Segerstrom Center for the Arts at 4:22 PM No comments: 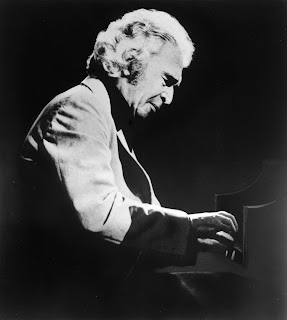 For one of Dave Brubeck’s visits with us, we decided on a more intimate series of evenings with him and the quartet in Founders Hall with the stage against one wall and the audience seated around on the other three. The opening night of the run was scheduled for Thursday September 13, 2001.


Mr. Brubeck’s representative was in contact with me late in the day on September 11 looking to cancel and reschedule the concert to a later time. Dave was in Stockton, the quartet was in the New York area, and all air traffic grounded for the next several days. I said that in times of tragedy and great sadness, music brings comfort and solace. He conveyed my message to Brubeck and his response was immediate. He and Iola started the drive down to Costa Mesa, and on the way on his cell phone, put together Bob Hurst on bass, Danny Brubeck on drums and Andy Suzuki on sax. They arrived the afternoon of the 13th, rehearsed for a time, and retired to their hotel.
At 7 p.m., the doors to Founders Hall opened, and the audience began to take their seats. Normally, the house would have been buzzing with excitement, having the chance to experience Brubeck and the group up close. But the capacity house was mostly quiet with subdued conversations, almost like church before the service begins.


Brubeck came out by himself. The audience was delighted to see him, greeted him with warm and extended applause, relieved to enter into the ritual and structure of a live concert. Out of the quiet, he began to slowly form the music, the old spiritual “Nobody Knows the Trouble I’ve Seen.” He played the melody line simply, with spare harmonic support in the left hand. At the end, the audience held their applause for a long while before rising to their feet in sincere appreciation.  With this one song, he had given expression to all our emotions with dignity and with the art of a master musician.
Danny, Bob and Andy then joined him for the next 90 minutes in a joyful, life-affirming set. We were all the better for it.


by Aaron Egigian, Senior Director of Music Programming at Segerstrom Center for the Arts

Posted by Segerstrom Center for the Arts at 11:54 AM No comments: 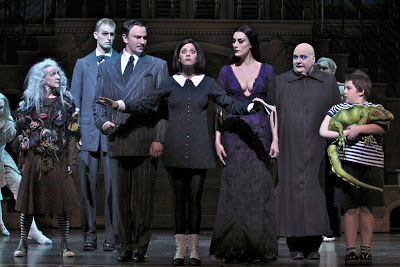 Segerstrom Center, in partnership with The Broadway League, welcomes the next generation of theater-goers by presenting KIDS' NIGHT ON BROADWAY during two performances of THE ADDAMS FAMILY. For each full-priced adult ticket purchased, a child's admission will be free. The offer is valid for young people ages 6-18 during the December 18-19 performances. The promo code is: KIDS.

The Center will also provide fun games and activities in the lobbies from 6-7 p.m. before each performance.

Posted by Segerstrom Center for the Arts at 4:59 PM No comments:

Downbeat Magazine has just released its top picks and Annual Readers Poll. High on the lists are many artists familiar to Center audiences through the Jazz Series and special engagements. Diana Krall was named Downbeat's Female Artist of the Year. Esperanza Spalding is there for No. 1 Jazz Artists and Jazz Album. No. 2 album is Blue Moon, by Ahmad Jamal, who just last weekend performed in the Renée and Henry Segerstrom Concert Hall. Also in the top 10 are other series veterans including Tony Bennett, Brad Mehldau, Arturo Sandoval, Sonny Rollins and Chick Corea.

Note: As Ahmad Jamal was leaving the concert hall, greeting guests and encouraging enthusiastic young fans and musicians, the Center's Senior Director, Music Programming Aaron Egigian asked him if he had enjoyed playing in the Renée and Henry. His response was immediate, "Oh yes, this is a wonderful hall, one of the five best halls in the world."

Posted by Segerstrom Center for the Arts at 5:03 PM No comments:

Members of the Trey McIntyre Project, who will perform at Segerstrom Center for the Arts November 23-25, stopped by St. Joseph Hospital and CHOC in Orange on Tuesday to visit patients, families and staff members. The smiles and genuine caring from the artists along with some impromptu dance moves shed a bright spot into their day. Thanks to TMP and the hospitals for their great work!

Posted by Segerstrom Center for the Arts at 5:25 PM No comments:

Trey's Back and Costa Mesa's Got Him! 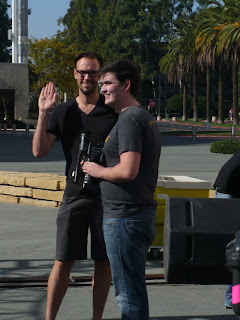 Trey McIntyre Project, one of the nation's most innovative and creative dance companies, has returned to Segerstrom Center and Orange County dance audiences. Trey, in glasses, is seen here with colleagues and stage crew as they prepare for the World Premiere of Ways of Seeing. Four works will be presented by TMP November 23-25: Ways of Seeing (commissioned by the Center and begins in Segerstrom Hall and transitions to the Arts Plaza), The Unkindness of Ravens (a Center co-commission and West Coast Premiere), Bad Winter and Ladies and Gentle Men. For more information and to purchase tickets, click here. 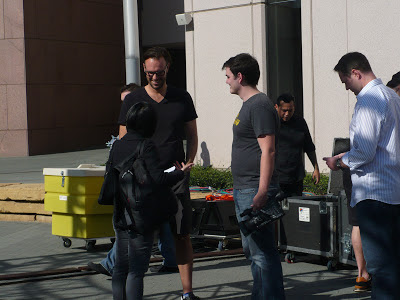 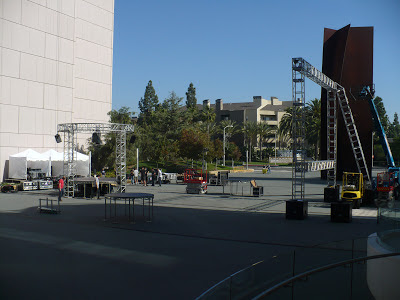 Posted by Segerstrom Center for the Arts at 2:31 PM No comments:

News from Russia: Boris Eifman's new ballet Rodin has been nominated for four prestigious Golden Mask Awards. This is Russia's most coveted award for the arts and Rodin was nominated for Best Ballet, Best Choreography – Boris Eifman, Best Dancer – Oleg Gabyshev and Best Ballerina – Lyubov Andreeva. Center audiences will have the chance to see Rodin in its West Coast premiere May 3-5 as part of the International Dance Series. Segerstrom Center itself won a Golden Mask in 2007 when Diana Vishneva: Beauty in Motion garnered three.

Posted by Segerstrom Center for the Arts at 3:09 PM No comments:

On opening night of Memphis, the cast and audience were greeted to an unexpected treat – a surprise flash mob during the show' finale. More than 100 OC students from the Anaheim Performing Arts Conservatory, Orange County School of the Arts and the Center's own Six Days of Broadway Musical Theater Camp participated. The flash mob was developed while the students were enrolled in Inspire Change, a nationwide education program developed by Memphis. In Costa Mesa, Center teaching artist Dalisa Krauss helped the young people explore the history of segregation during the 1950s and how Rock N' Roll encouraged people to enjoy music regardless of race. Since February 2012, nearly 2,000 students have had the opportunity to enjoy Memphis on Broadway through Inspire Change.

Posted by Segerstrom Center for the Arts at 2:17 PM No comments: 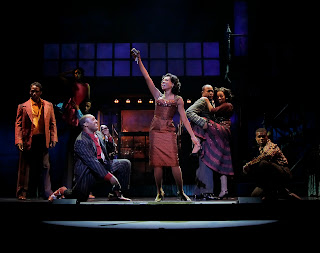 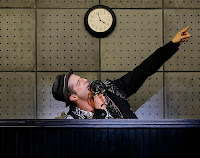 Chef Ross of Leatherby’s Cafe Rouge has created a special menu for Memphis, which comes to the Center November 6 – 18. Audience members may enjoy this special pre-performance menu or other selections before all evening performances.

Leatherby’s is located in the Renée and Henry Segerstrom Concert Hall just across the plaza from Segerstrom Hall, where Memphis is being performed. Check the menu by clicking here.

Posted by Segerstrom Center for the Arts at 2:53 PM No comments: 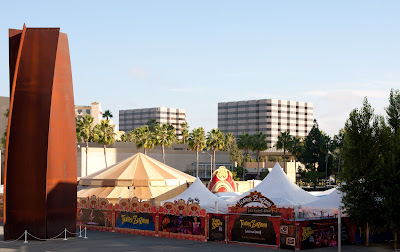 If you have visited the Center these last few weeks, you may have noticed a flurry of activity on the Arts Plaza. Behind the barricades and within the white tents you will find the ever historic and grand Spiegeltent (mirror tent) the Palais Nostalgique. For the next few months, this very special venue will call Segerstrom Center's Arts Plaza home. 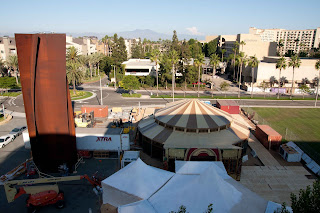 Teatro ZinZanni is in town and on October 24 the brand new show Love, Chaos & Dinner will debut. Patrons will enjoy a three-hour whirlwind of international cirque, comedy and cabaret all served up with a delectable five-course feast and fanciful libations from Patina Catering. Palais Nostalgique is the magical setting for all this revelry.

This beautiful and antique theater originates from Belgium and is ornate with red velvet and gold brocade, stained glass and deep mahogany. The European cabaret tents, known as Spiegeltents, were constructed in the 1910’s by renowned craftsman Willem Klessens. These warm, intimate circular theatres hosted dances, wine tastings, cabarets and celebrations in Europe for almost a century.  Palais Nostalgique was buried deep underground during WWII and made it through the conflict unscathed. The century-old tent is still in fine form. Standing twenty-nine feet tall, with a circumference of 211 feet, it can comfortably accommodate 285 audience members, along with the wait staff, clowns, singers, jugglers, trapeze artists, contortionists, musicians and acrobats. 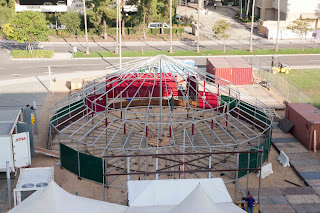 Each tent consists of more than 4,000 pieces. Designed to be set-up and broken down in one day, Klessens’ Spiegeltents require no metal fasteners for construction and can be assembled by a team of three or four in a single day.

The tents are still owned by the Klessens family who lovingly restore and tour their grandfather’s tents. The crew from Belgium arrived in Costa Mesa on September 26 to oversee the construction of Palais Nostalgique.

Posted by Segerstrom Center for the Arts at 4:14 PM No comments: 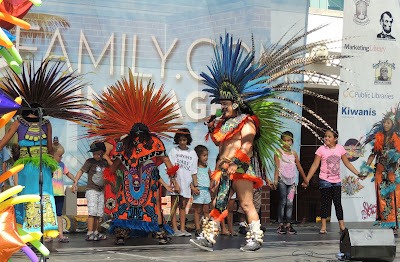 Nearly 800 people enjoyed performances by Danza Azteca and Swazzle, two of Segerstrom Center’s teaching artists, during the Orange County Children’s Book Festival held at Orange Coast College. The performers entertained and engaged with audience who were there to share the fun of reading, literacy, the performing arts and cultural diversity. Were you there? Post your photo to the Center’s Facebook page.

Posted by Segerstrom Center for the Arts at 11:10 AM No comments:

You can preview the spectacular dinner menu that Patina’s Chef Ross has in store for audiences at Teatro ZinZanni when it opens at the Center on October 24.  (Ross Pangilinan is also the executive chef at Segerstrom Center’s Leatherby’s Cafe Rouge.) We are also sharing the recipe for Patina's signature braised prime beef short rib.
﻿﻿﻿


Patina Catering has created a very special five-course thematic dinner that audiences will enjoy when they attend Teatro ZinZanni’s Love, Chaos & Dinner at Segerstrom Center for the Arts. Click here to learn more about the menu, download the recipe as well as purchase tickets.

See you at the Spiegeltent!

Posted by Segerstrom Center for the Arts at 11:09 AM No comments:

Opportunities to Reach the Artists and Audiences of the Future 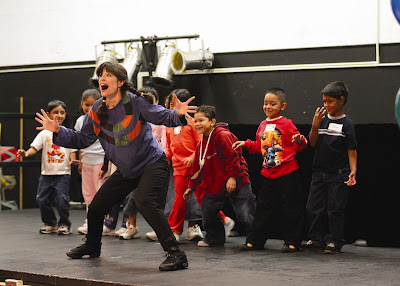 The Center has an extensive roster of exceptionally talented teaching artists who offer more than 3,000 sessions throughout the region each year. Each of these specially-trained teaching artists meets the high standards that we require of this group, with equal emphasis on artistry, instruction and engagement. 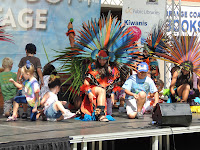 To continue to meet the changing needs of the community we serve, we are always on the lookout for new artists to join our ranks especially in the areas of ballet folklorico, beat boxing, hip hop, mariachi, musical theater, string quartets, guitarists, jazz ensembles and visual artists.


If you know of an artist or artists that you think would make an valuable addition to the team, click here to learn more about this program. 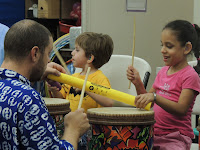 Posted by Segerstrom Center for the Arts at 10:44 AM No comments: